Nicknamed “The Bay State” but also known as the “Colony State,” “Old Colony,” “The Spirit of America,” “The Pilgrim State,” and “Taxachusetts,” Massachusetts was the 6th state to join the United States of America on February 6, 1788.

It has a population of 7.1 million (as of 2021), making it the 15th most populous state. Massachusetts is bordered by Rhode Island, Vermont, New York, New Hampshire, and Connecticut.

That’s enough fast facts about the Bay State for now; we’re here to learn some of the more unique facts!

The Commonwealth of Massachusetts is named after a local indigenous tribe.

There are several different ways in which the name can be translated, too, with Massachusetts meaning “near the great hill,” “at the little big hill,” or “by the blue hills.”

All of the translations seemingly refer to the Great Blue Hill, which is the highest point in the Greater Boston Area at 635 feet (193 meters) high. 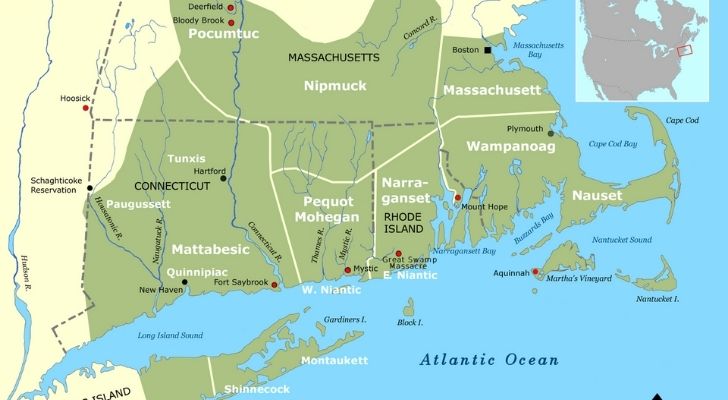 People had inhabited the region now known as Massachusetts for thousands of years before Europeans ever set foot there.

The original people to live there would have been the descendants of the Paleo-Indians who first settled the Americas after crossing into Alaska from far-east Russia along the Bering Strait.

By the time Europeans came onto the scene, there were many different tribes, all speaking variations of the Algonquian language.

To the east were the Massachusett, to the southeast towards Cape Cod were the Wampanoag and the Nauset, while the Nipmuck and Pocumtuc were further inland to the west.

There were also a few more who lived partially in Massachusetts and partly in the bordering states.

The Pilgrims founded the Plymouth Colony in Massachusetts. 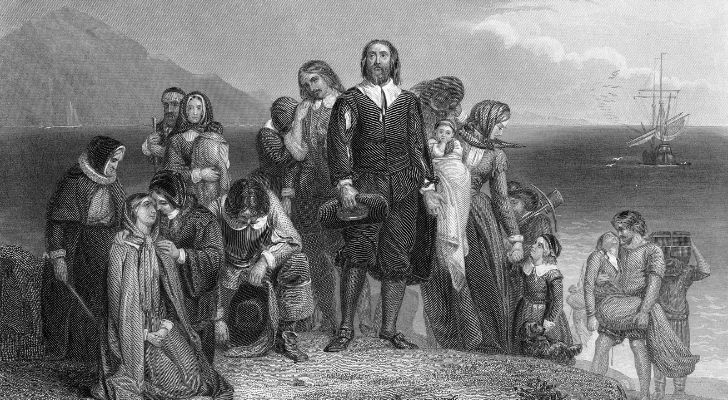 No matter where in the world you’re from, you’ve probably heard of the Pilgrims and their silly-looking black hats.

In reality, the Pilgrims were like many others who left their homes in England searching for a better life in the New World.

Like many others before and after them, they too were fleeing from religious persecution.

In the Pilgrims’ case, they were Separatist Puritans, Protestants who fled first to Holland and then later to North America to settle into a new life by founding the Plymouth Colony in 1620.

The Pilgrims are a cornerstone of American history and culture because their colony, the Plymouth Colony, was the second colony in New England to be successful.

As a result, their story was well known among all who followed in their footsteps to new beginnings.

The tradition of Thanksgiving originated in Massachusetts. 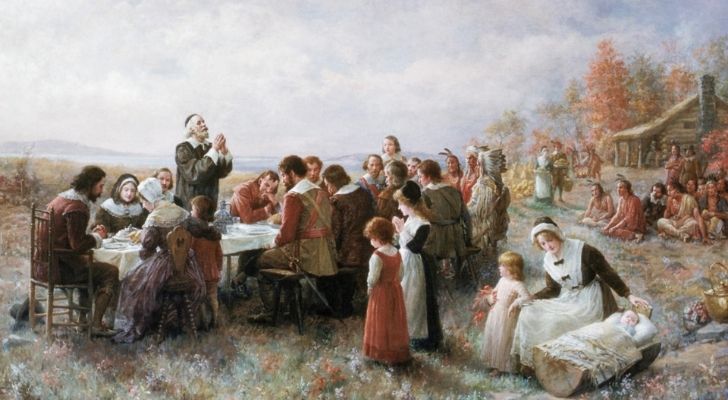 When the Pilgrims arrived, they quickly realized that they would need to make peace with the local tribes.

So, after some time working towards that goal, they ended up having excellent relations with the Wampanoag people.

In 1621, one year after their arrival, the Pilgrims held a great feast to give thanks to God for a bountiful harvest, as well as their survival.

The 53 surviving Pilgrims feasted for three days with the Wampanoag chieftain and his men.

This First Thanksgiving is estimated to have happened around October. The feast was primarily made up of local fowl such as wild turkeys and plenty of shellfish from the nearby waters.

In the 17th century, 19 “witches” were taken to trial and hung in the town of Salem, Massachusetts. 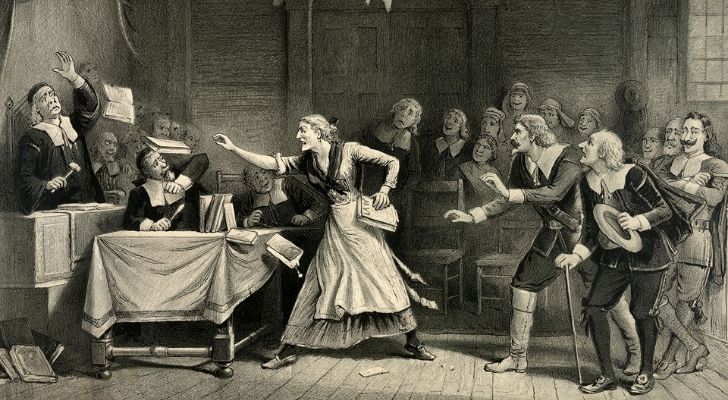 Known today as the Salem Witch Trials, the events which took place have horrified some and inspired others for hundreds of years.

The trials took place between February 1692 and May 1693 in the then colony of Massachusetts, mainly in Salem and Salem Village.

For just over a year, more than two hundred people were accused of witchcraft, with some of the accused being as young as four years old.

By the end of the trials, 30 people had been found guilty of witchcraft, with 14 women and 5 men being put to death by hanging.

The trials are known to be the deadliest of all colonial North American witch trials.

Massachusetts was at the heart of the American Revolution. 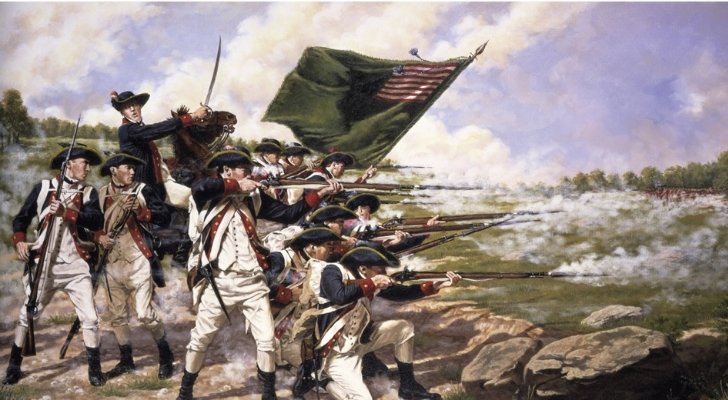 Of all the New England colonies, Massachusetts was the most disenfranchised by the British Monarchy.

At the heart of it all was the city of Boston, where tensions had been rising steadily until they reached a breaking point in 1770.

One of the last straws is known as the Boston Massacre, where British soldiers gunned down five local men for throwing rocks at them.

The Boston Tea Party occurred shortly after in 1773. The British introduced laws that gave the British East India Company an essential monopoly on the tea trade in the region, thus lowering any potential profits of companies based in Massachusetts.

This final act snowballed out of control, eventually leading to the American Revolution. 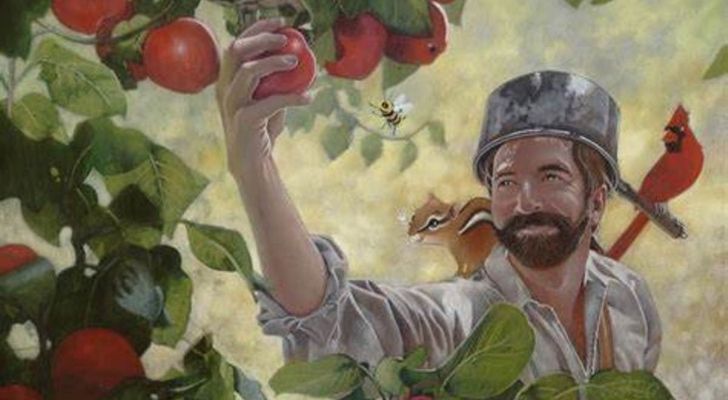 In fact, he’s the official folk hero of the state of Massachusetts.

He was born as John Chapman in the town of Leominster on September 26, 1774.

Johnny was a pioneer in botany and one day took it upon himself to spread the joy of apples all across the nation.

While it’s commonly thought that he went about his ways randomly scattering apple seeds, he actually put a lot of thought into it.

Wherever he went, he established a nursery, planting a sapling and building a high fence, which he then left in the care of a neighbor.

It was from these nurseries that Johnny Appleseed’s apple trees ended up all over the country.

Massachusetts played a central role throughout the American Civil War. 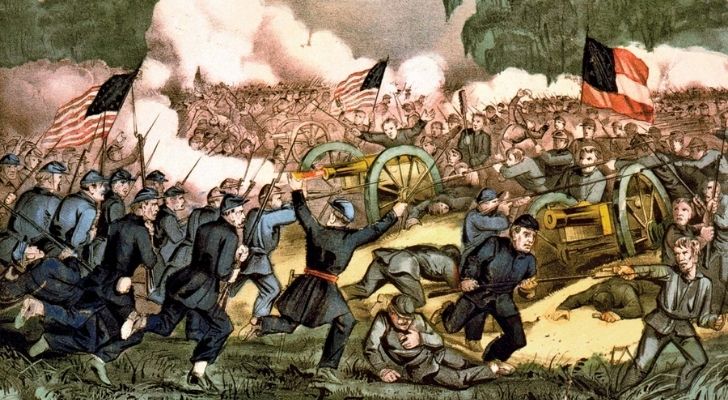 For many years before the Civil War, Massachusetts had been becoming more and more progressive, with abolitionist movements swaying the public opinion away from the use of slavery.

When the Civil War finally broke out, the state was the first of the Union States to answer Abraham Lincoln’s call to arms and was even the first state to have a regiment of all-black troops (although the officers were still white).

Another fundamental way Massachusetts aided the war effort was by producing the majority of the Union’s firepower at the Springfield Armory in Springfield, Massachusetts. 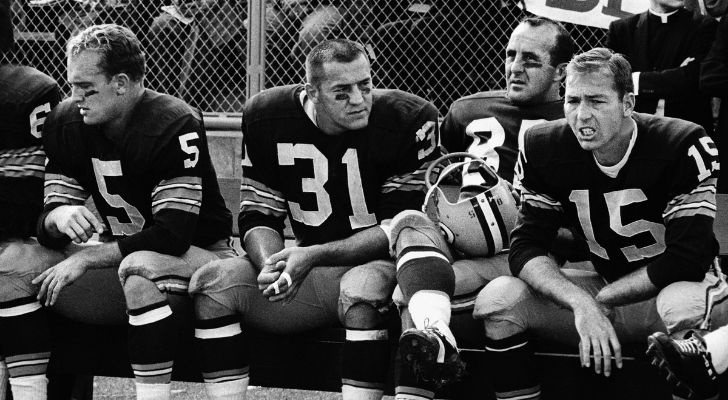 They were both invented shortly after each other, too. In 1891 a man by the name of James Naismith from Springfield invented the game of basketball.

Naismith came up with the idea while trying to find a game for the youths of New England that could keep them busy during long winter months indoors.

William G. Morgan was inspired by the new game and sought to create a game that would be more accessible to people of all ages and athletic abilities, eventually creating the game of mintonette in 1895.

The name didn’t really roll off the tongue nicely, so instead, it was named volleyball!

There’s a town in Massachusetts that has a museum dedicated to terrible art. 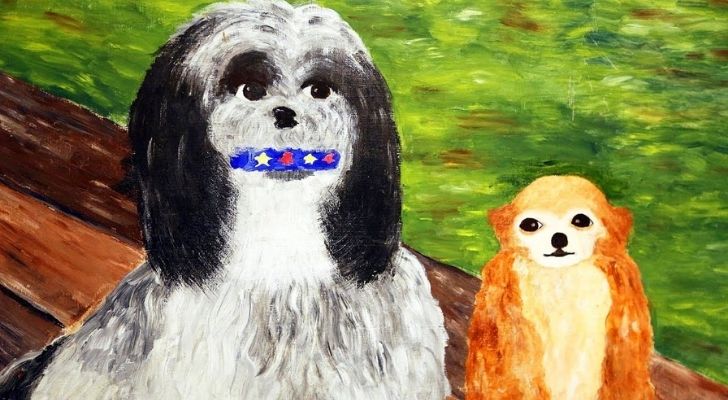 It’s called the Museum of Bad Art (MOBA), and it’s located in the town of Somerville.

Unsurprisingly, the museum is dedicated to sharing some of the world’s worst art,

One of the more intriguing paintings is the Mona Lisa’s unfortunately ugly cousin, the Mana Lisa.

There’s a house built out of newspapers in Rockport, Massachusetts. 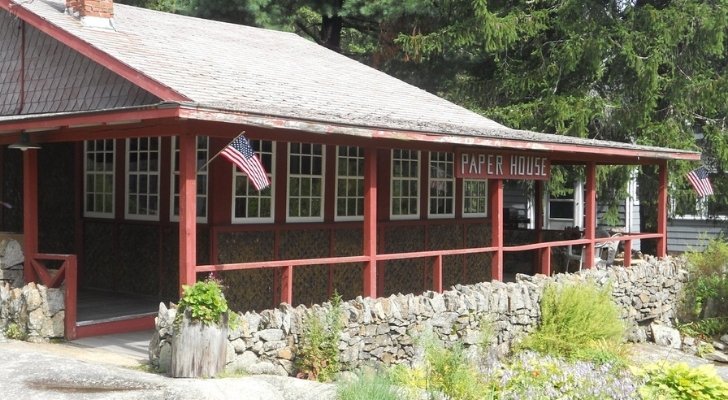 It’s the classic tale of a vague interest turning into a hobby and then rapidly devolving into an obsession.

By the time he completed the house 20 years later, he had used more than 100,000 newspapers.

Stenman didn’t stop when the house was completed and went on to build the furniture out of it, including a grandfather clock!

A large number of famous US politicians were born in Massachusetts. 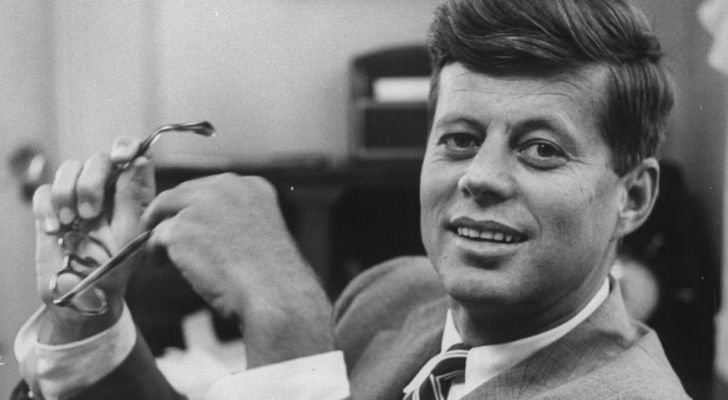 First and foremost would have to be the Kennedy family, who played many vital roles in the country’s political history.

Most notable in the Kennedy family has to be John F. Kennedy, who was first a senator and then the president of the United States before he was assassinated in 1963.

Another Massachusetts-born president was George H. W. Bush, who served between 1989 and 1993.

Boston was struck by a bizarrely deadly disaster in 1919. 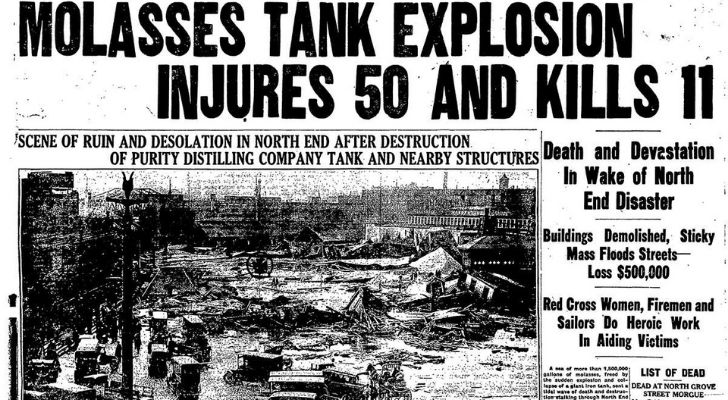 It’s known as “The Great Molasses Flood,” and it’s exactly as weird as you can imagine.

Most people today know molasses as a sweet treat, an ingredient to be used in baked goods.

At the beginning of the 20th century, there was another use for this sticky liquid – alcohol production.

The Purity Distillation Company was doing just this at their distillery in Boston, where they had an enormous tank that held up to 2.5 million gallons (9.4 million liters) of molasses.

On January 15, 1919, the tank exploded, which flooded the entire north end of the city.

This bittersweet calamity injured as many as 150 people and killed 21 others.

If you live in Boston, then you’re never more than 1.5 miles away from Dunkin’ Donuts. 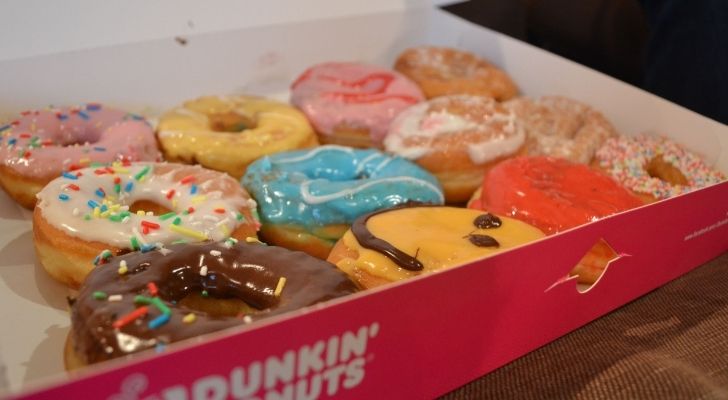 The delicious doughnut chain first began as a single shop in the town of Quincy, Massachusetts, in 1948 before expanding nationally.

Dunkin’ Donuts has done exceptionally well over time, with locations now all over the world.

What’s even more fascinating, though, is how deeply entrenched the chain is into Massachusetts society, with a restaurant for every 6500 residents (that’s 350 in the whole state!).

Massachusetts is home to a lake with the longest place name in the US. 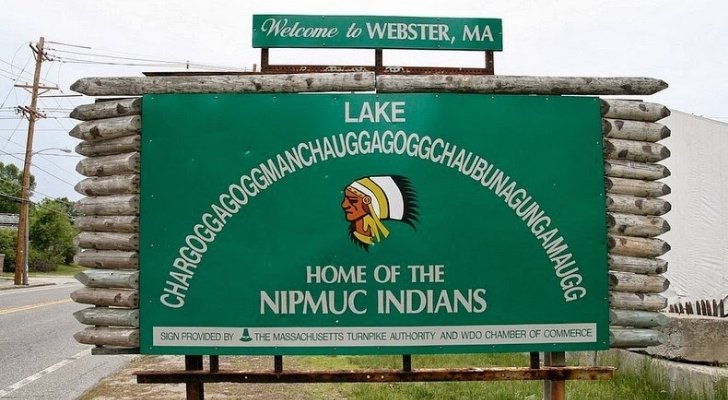 The lake’s name is Chargoggagoggmanchaoggagoggchaubunaguhgamaugg, and no, I am not messing with you.

Not only does this lake have the longest place name in the US, but it has the third-longest in the world.

The lake’s name comes from the local Nipmuc tribe, and according to local legend, it translates into “You fish on your side, I fish on my side, and nobody fish in the middle.”

Unfortunately, this is not the correct translation, with the real one making a little less sense – “Englishmen at Manchaug at the fishing place at the boundary although.”

I’m not sure about you, but I prefer the legend!

Considering the colony of Massachusetts’s central location in New England, it’s no small surprise that it ended up becoming the industrial and political powerhouse that it is today!

There’s always a solid amount of monumental moments in history with any state as old as this.

So understandably, Massachusetts is no exception, what with the Boston Tea Party, the Salem Witch Trials, and even the Great Molasses Flood!