Minnesota is bordered by the states of South Dakota, North Dakota, Michigan, Iowa, and Wisconsin.

The capital of Minnesota is Saint Paul, which is situated in the southeast of the state.

That’s enough fast facts about the Land of 10,000 Lakes for now, though; we’re here to learn some of the more magnificent facts!

There are two very different translations of the state’s name. 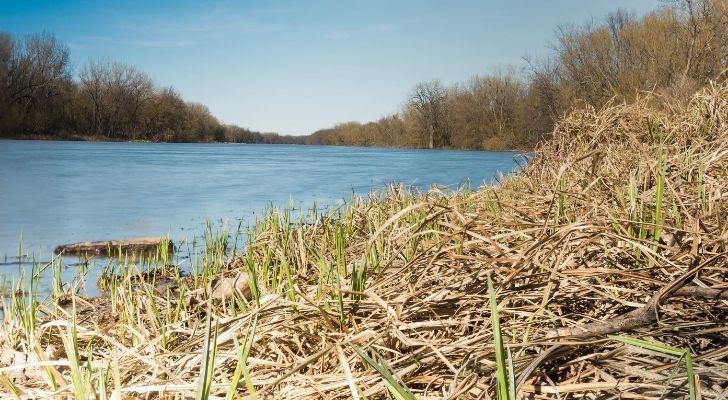 It’s something that is still up for debate today and possibly will always be.

The state of Minnesota was named after the Minnesota river, that much we know for sure.

We also know that the Minnesota River was named after the Dakota people’s name for it, mní sóta.

The point where it becomes a little questionable is when we try and translate the Dakota name mní sóta.

The two most popular translations couldn’t be more different either, with one translation naming it “clear blue water” and  the other calling it “cloudy water.”

It is told that when the early settlers moved into the region, the name of the river was explained by dropping some milk into the water and saying the words mní sóta.

People have lived in Minnesota for at least 11,000 years! 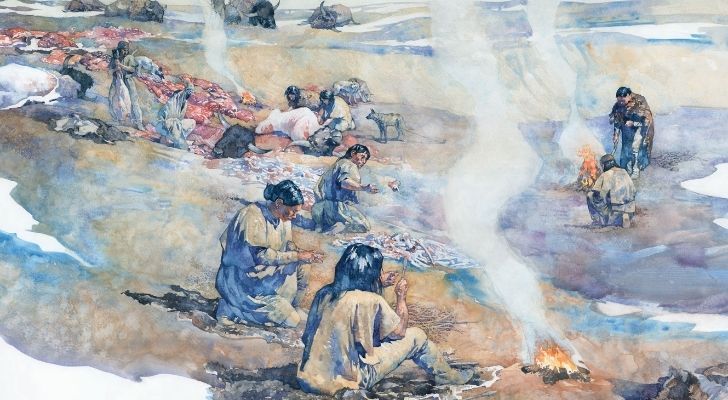 While it’s commonly accepted that the majority of North America was settled sometime around 9,000 BC, there’s generally little to no archaeological evidence other than a few arrowheads to back this up.

An exception to this can be found in Minnesota, with the Browns Valley Man, one of the best-preserved human skeletons dating back to the era of the Paleo Indians, some 11,000 years ago.

The Browns Valley Man was discovered in 1933, along with a number of tools that aided in dating the skeleton.

It’s widely accepted these days that the first people to set foot in the Americas were Paleo Indians who crossed from what would come to be the far east of Russia into Alaska via the Bering Strait around 12,000 BC, around the end of the Ice Age.

They didn’t settle in one location, though; instead, they followed herds of animals such as mammoths, living off what they could hunt and gather.

When Europeans discovered Minnesota, there were already many tribal settlements there. 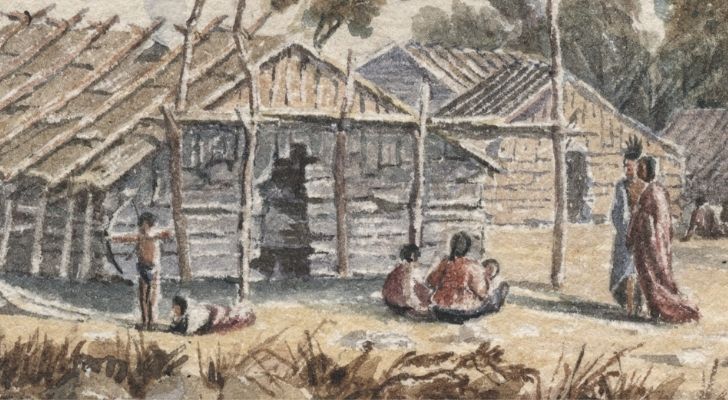 It took a long time for the first Paleo Indians to settle down and establish tribes and villages.

The first Archaeological evidence for permanent settlement dates back to 3000 BC, with the evidence coming from stone petroglyphs found in southern Minnesota.

By around 700 BC, the first burial mounds started popping up around the place, a tradition seen all over North America.

It wasn’t until around 800 AD that things really started kicking off with the cultivation of wild rice and corn, allowing progressively larger and larger settlements.

By the time Europeans first set foot in Minnesota, there were many different tribes associated with different cultures spread across the region.

The largest of these was the Dakota people, one of the Sioux nations.

Some other tribes within the region were the A’ani to the West, the Ioway to the south-west, the Ho-Chunk in central Minnesota, as well as some smaller tribes along the banks of Lake Superior.

The first Europeans to explore Minnesota were fur traders. 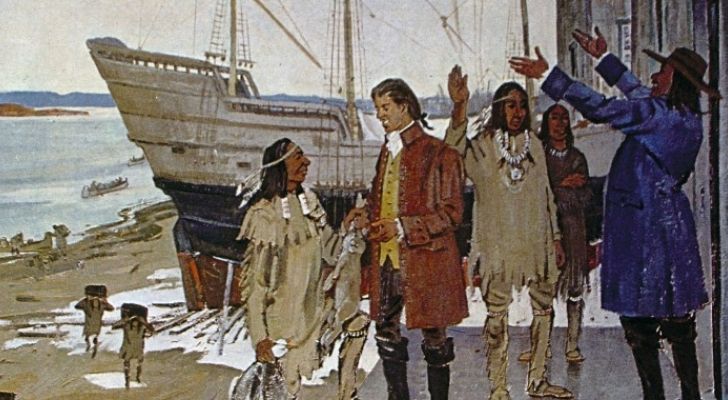 It wasn’t until around 1650 that Europeans reached parts of Minnesota. However, it’s unclear who exactly first set foot in the region.

The French explorers and fur traders Pierre Esprit Radisson and Médard des Groseilliers were most likely the first to make contact with the Dakota people.

However, this was on the southern shore of Lake Superior, in what would become Wisconsin.

The most likely first European to reach Minnesota was the French explorer and Jesuit missionary Claude Allouez.

Allouez lived for a time on an island in the middle of Lake Superior and created a map of the area in 1671.

Minnesota changed hands many times before it came under US control. 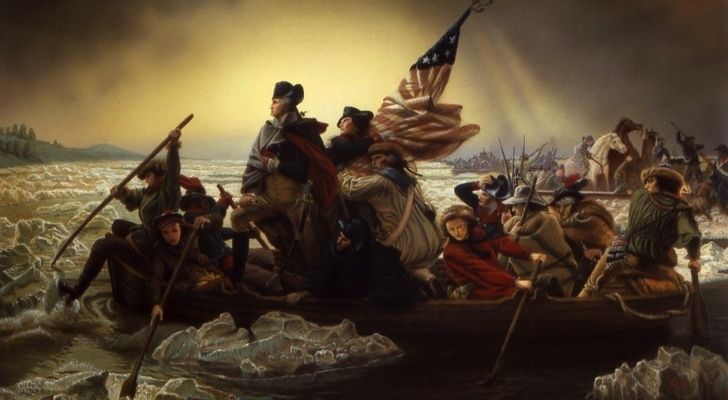 As the first Europeans to settle in Minnesota were the French, they claimed the region as a part of the great swathe of land, which they called La Louisiane (Louisiana).

By the mid 18th Century, a number of major European players all started fighting for control of the region, primarily motivated by the lucrative fur trade opportunities.

Before the end of the war, Spain gained control of all of France’s land west of the Mississippi River, including parts of what would later become Minnesota.

Spain held control of this region until 1802, when it was returned to France.

France barely had enough time to sign the necessary paperwork before they sold the entirety of La Louisiane to the newly formed United States of America in 1803.

Parts of Minnesota (to the East of the Mississippi River) were lost to the British at the end of the Seven Years’ War. In turn, they were won by the USA through the American Revolution.

The first US settlement in Minnesota was Fort Snelling. 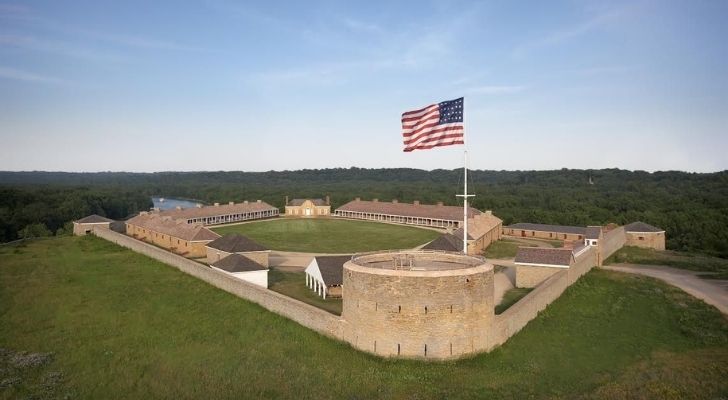 The fort was built on land acquired by the famous US military man and explorer Zebulon Pike in 1805, completing the fort in 1825.

At the time of Fort Snelling’s founding, Minnesota was still largely unexplored and unmapped, and as such, the fort was primarily a frontier outpost.

One of the primary duties of the fort was mediating the numerous conflicts between the local Dakota people and the Ojibwe people, the latter having migrated into the region in the mid-1700s.

Minnesota’s state capital was originally named after a man who made moonshine. 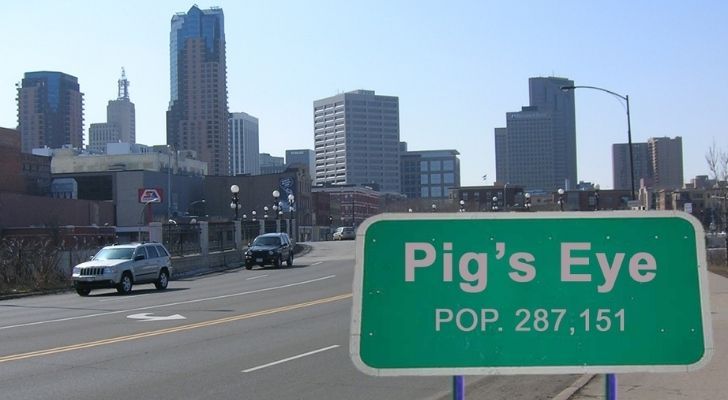 In the early 1800s, the Red River Colony was founded along the border between the USA and British North America (what would later become Canada).

Many residents abandoned the colony shortly after it was founded, but instead of returning north or to Europe, they headed south and eventually settled outside Fort Snelling.

It was there that the ramshackle village of Pigs Eye was founded, named after Pierre “Pig’s Eye” Parrant, a refugee from the Red River Colony who was famous for making the best moonshine around.

The town was later renamed Lambert’s Landing, and then again renamed Saint Paul, before becoming the capital when the region attained statehood in 1858.

The two largest cities in Minnesota are so close they’re almost on top of each other. 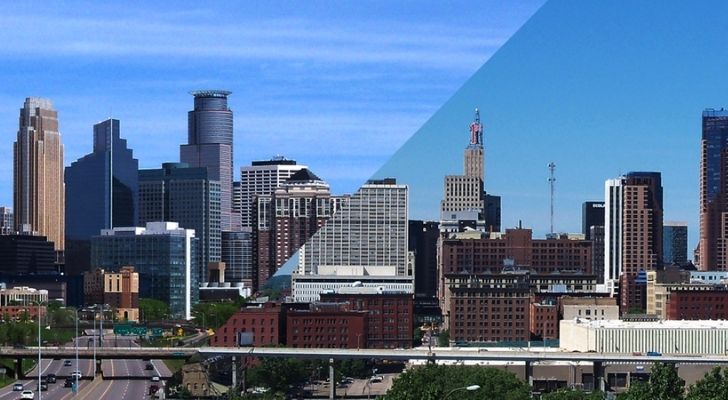 We’re talking about the Twin Cities of Minnesota, Saint Paul, and Minneapolis. Minnesota’s capital city was incorporated as a city in 1854, just 13 years before Minneapolis.

They’re also just a stone’s throw away from each other, with the cities lying on either side of the Mississippi River.

It’s no small wonder that a strong rivalry grew between residents of the two cities.

While Saint Paul grew in size due to its importance as a state capital, Minneapolis grew even larger due to its industrial capabilities.

At one point, it looked as if Minneapolis would engulf Saint Paul and absorb it, which resulted in the term “Twin Cities” being coined to ensure each city kept to its own.

Minnesota has more timberwolves than nearly any other US state. 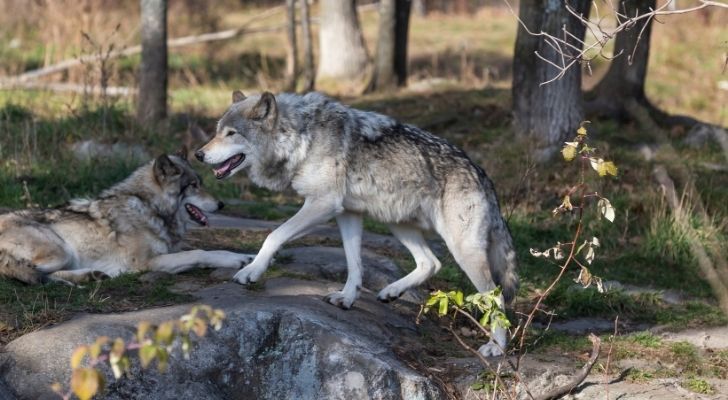 I say nearly, because the only other state with more timberwolves is Alaska, and who doesn’t expect Alaska to be pretty much overflowing with wolves?

A large portion of Minnesota’s original forests has been cleared either for farmland or for timber, dramatically affecting the local fauna.

If there are still that many wolves left in the state today, imagine how many there used to be! 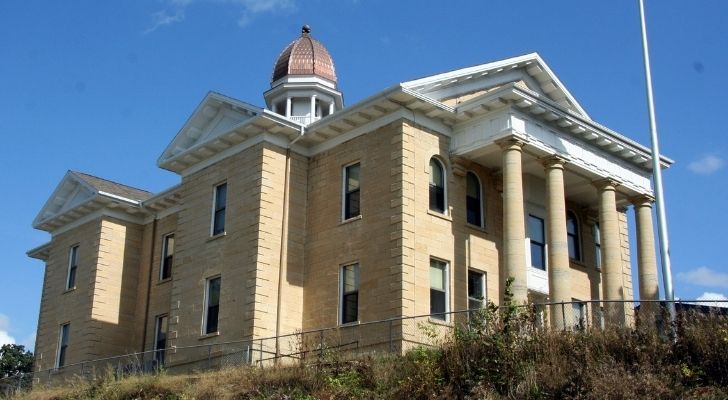 Minnesota had a rather difficult road to statehood, but one of the largest challenges was coming up with a state constitution that anyone could agree upon.

The issue with the constitution came down to the Democrat and Republican parties, who couldn’t come to terms on many points.

In fact, they disagreed so strongly with each other that they ended up drafting two completely different constitutions!

As expected, neither side agreed with the other draft, and a convention was held to find some form of compromise.

When a constitution that both sides agreed upon was finally drafted, and everything looked like it would go ahead, there was one last hitch.

Neither the Democrats nor the Republicans would sign a document that had the other party’s signature on it!

The constitution was finally approved, with Minnesota’s state forming on May 11, 1858.

The source of the Mississippi River lies in Minnesota. 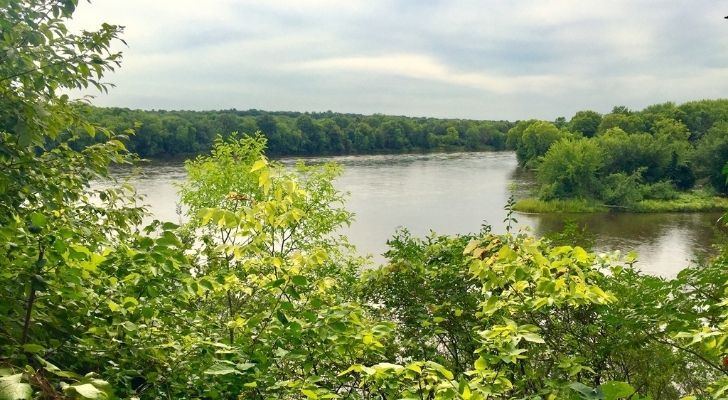 It’s no recent discovery, either! Way back in the 1800s, there were several attempts to find the source of the Mississippi River.

After a few of these attempts failed, the source was finally located in 1832 by Henry Schoolcraft, an American geographer, and geologist.

Schoolcraft was successful when others had failed as he turned to the local Ojibwa people to guide him to the source, which he found coming from a lake that he named Lake Itasca.

While the lake was known to the local people as Omashkooz, meaning elk, Schoolcraft named it Itasca after the Latin words for truth and head.

The largest mass execution in US history took place in Minnesota. 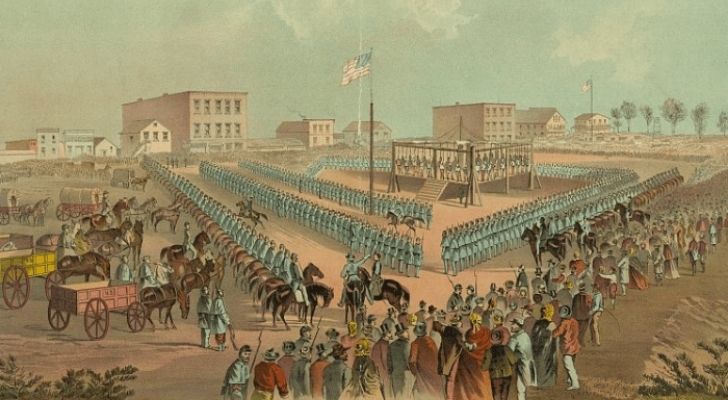 When Minnesota attained statehood, the Dakota people’s lands were reduced further and further, and promises of monetary aid never led to anything more than disappointment.

A group of young Dakota men, half-starved to death, killed a family of white settlers while out on a hunting trip.

A council of Dakota leaders decided to follow their example, declaring war on their white neighbors in an attempt to drive them away and regain their ancestral homelands.

The proceeding war came to be known as the Dakota War of 1862, and it lasted six weeks.

By the war’s end, a group of 38 Dakota men was hung to death in Mankato, the likes of which have fortunately not been seen since.

The northernmost point of Minnesota can only be accessed by water. 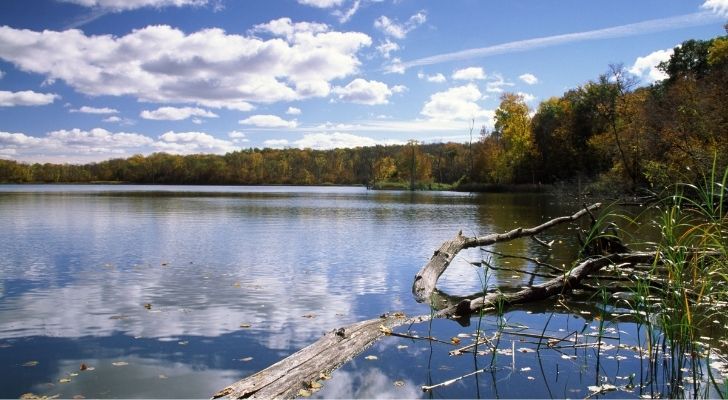 In the far north of the Lake of the Woods County lies a piece of land known as the Northwest Angle.

It’s a piece of land that never really should have been a part of the USA, either, as America only owns it due to a surveying error when the border between the USA and Canada was drawn up.

The only way to get there without leaving the US is to cross the waters of the Lake of the Woods. Alternatively, if you want to travel there by land, you must cross into Canada and then back into the US.

People in Minnesota are so friendly there’s a term for it. 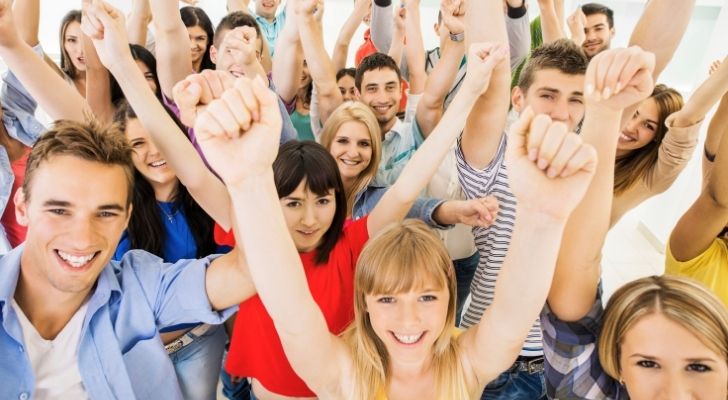 It’s called “Minnesota Nice,” and it’s quite possibly the most confusing thing ever.

While some claim that people from Minnesota are genuinely just that friendly, others will be quick to point out it more comes down to an inclination to avoid confrontations, good or bad.

No matter what you think of it, it’s considered to be one of the most confusing things any out-of-stater will ever experience while passing through Minnesota!

Darwin, Minnesota, is home to the largest ball of twine made by one person. 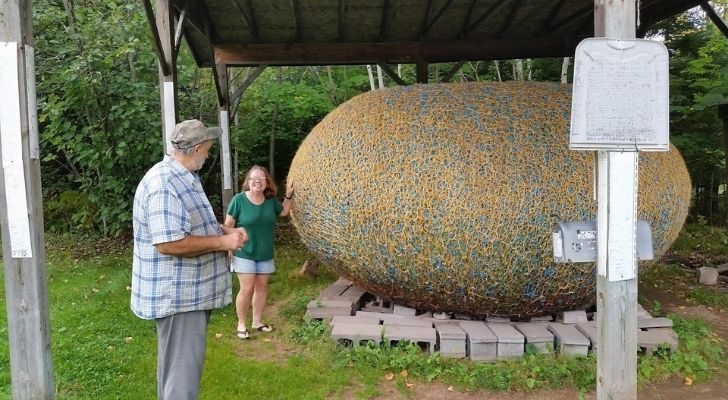 There’s something about small-town America that’s obsessed with the next biggest thing, and in this case, we’re talking literally!

While the largest ball of twine on record lies all the way over in Cawker, Kansas, residents of Darwin think theirs is better.

The reason? Their ball of twine was made by just one man! Francis A. Johnson started rolling his ball of twine in 1950 and kept on going for four hours a day until 1979 when the ball reached a ginormous 17,400 pounds (7,900 kg).

Minnesota is a funny one. To the untrained eye, with its friendly locals and northern latitudes, one might make the mistake of thinking that Minnesota is really Canada.

That is, of course, until you come across something like Darwin’s great ball of twine or the sprawling Mall of America.